Depending on the direction of the DC current flow it's possible to cool and heat with Peltier elements without changing the connectors or mechanical setup. Further advantages are that small designs can be realized and there are no moving parts. The current supplied to the Peltier element is controlled by a TEC controller.

Since cables have a thermal capacity they are connected to the hot side of the Peltier element, not to decrease the cooling capacity of the element.

As you can see in the right picture, there are different types of Peltier elements.They vary in size and form, power and temperature range.

Peltier elements can be characterized by a model. The following three effects are subject to this model

Parameters of a Peltier Element

Besides mechanical properties Peltier elements are characterized by four important parameters. Which are provided by the manufacturer: Qmax, dTmax, Umax, Imax

The parameters Qmax and dTmax are theoretical figures and they are used to describe the behavior of Peltier elements. However, those maximum values are never reached in a thermoelectric application. They are provided by the manufacturer to characterize the performance of the Peltier module.

In a thermoelectric application, there is always a trade-off between heat pump capacity Qc and temperature difference dT.

Properties and behavior of Peltier elements

The following four diagrams characterize a Peltier element good. They are a useful to unterstand the properties and the behavior of Peltier elements. Similar diagrams are also used by manufacturers sometime, for example Ferrotec. The values in the charts are all relative.

This normalized diagram describes the relationship between the heat pump output on the y-axis and the current on the x-axis for different values of temperature differences between the hot and cold side (dT = Thot - Tcold) in the case of cooling.

Dynamics of a System. Normalized diagram Heat Pumped vs. Current

Normally, the current through for the Peltier element should be between 0 and 0.7 times Imax.

Dynamics of a System

Dynamics of a System. Normalized diagram Heat Pumped vs. Current

To understand the dynamics of the system, we can observe what happens if the temperature changes—and therefore the dT—or when the heat load is increased.

If we operate the Peltier element with a current around 25% of Imax it is possible to compensate a 10-Kelvin-rise of dT—point A to B—To ensure that the heat pump performance remains constant, the current must be increased. The heat pump capacity can be increased as well without changing dT, if we move from A to C.

If the working point is around 60% of Imax we need more current than in the previous example to compensate a 10-Kelvin-rise of dT—point D to E—when the heat pump capacity should stay unaffected. The heat pump capacity can still be increased without losing temperate difference, if we move from D to F.

However, if the Peltier element is operated near its maximum current, a change in temperature can’t be compensated by increasing the current. The transition from a lower to a higher temperature difference would result in a decrease of heat pump capacity.

The following diagram shows the performance (COP) versus the current ratio I / Imax, the values in this diagram are relative and normalized.

This diagram shows the performance (COP) versus current relationship. Use it to find the operating current yielding the highest performance for a corresponding temperature difference dT.

On the left side, we see that the COP is maximum at the lowest temperature difference. Hence, we get a high amount of heat pumped per unit of electrical power. As we can see, depending on dT the corresponding COP maximum is at different current levels—with higher dT it moves to the right. If we follow the curve to the right, we find out that we must put a lot of electrical power into the system to get only a little heat pumped, what corresponds to a low COP value. We can also observe that higher currents are needed to produce higher temperature differences.

The reason why the COP does not start at zero with a dT > 0 K is because first the heat backflow QRth must be compensated by the Peltier effect Qp before the Peltier element cools.

Heat Rejected of a Peltier Element

The following diagram shows the heat Qh to be dissipated on the warm side of the Peltier element versus current relationship when cooling. 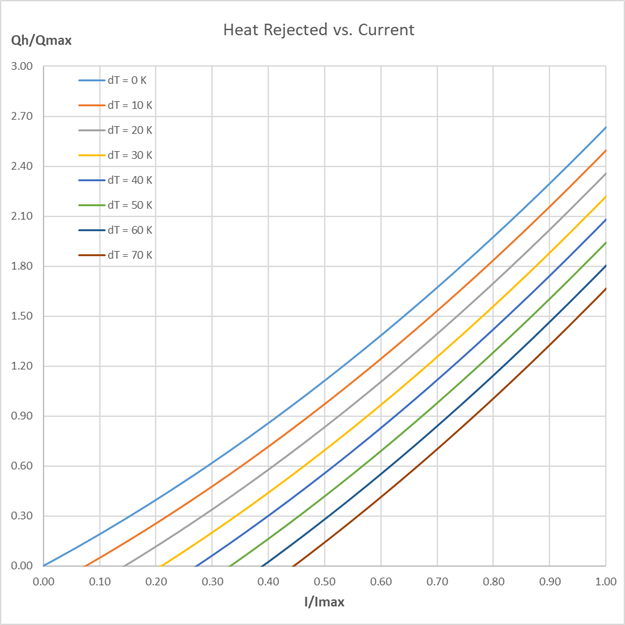 The values are normalized and relative. As you can see Qh rejected by the Peltier element, can be up to 2.6 times Qmax. The amount of heat on the hot side Qh can be so large because the heat from the Peltier effect Qp and the heat of the loss resistance QRv must be dissipated. Qh = Qp + QRv applies.

Dependency of Rejected Heat on dT

The following diagram shows the ratio between Qh and QC for different dT in case of cooling. The ratio Qh/ Qc is a factor how much more heat has to be dissipated on the hot side than on the cold side.

Normalized diagram showing heat rejected by the heat sink per amount of heat pumped vs. current for different dT.

This normalized diagram describes the relationship between the voltage on the y-axis and the current on the x-axis for different values of temperature differences between the hot and cold side (dT = Thot - Tcold) in the case of cooling.

As you can see, the curve is linear. The behavior of a Peltier element is the same as a resistor with a voltage source. The slope of the curve decreases with increasing dT. The displacement on the y-axis is related to the Seebeck effect.